The Amberley Deposit (EPC 2127) comprises 12 sub-blocks covering an area of 36.5km2 and is located approximately 8km south east of the Jeebropilly Coal Mine and 5km from the former producing Ebenezer Mine.  The Ebenezer Mine has produced both domestic and export quality thermal coal.

Coal measures in this region are banded Walloon Coal measures. The Amberley Project deposit is situated along strike extensions of existing known coal deposits and is found in eight seam groups – UNA, UNB, A, B, C, D, E & F.  Cuesta’s 2012 drilling intersected between 2 to 8 seams with individual seam ply thickness varying from 0.1m to 1.9m, sufficient confidence in seam correlation was achieved. 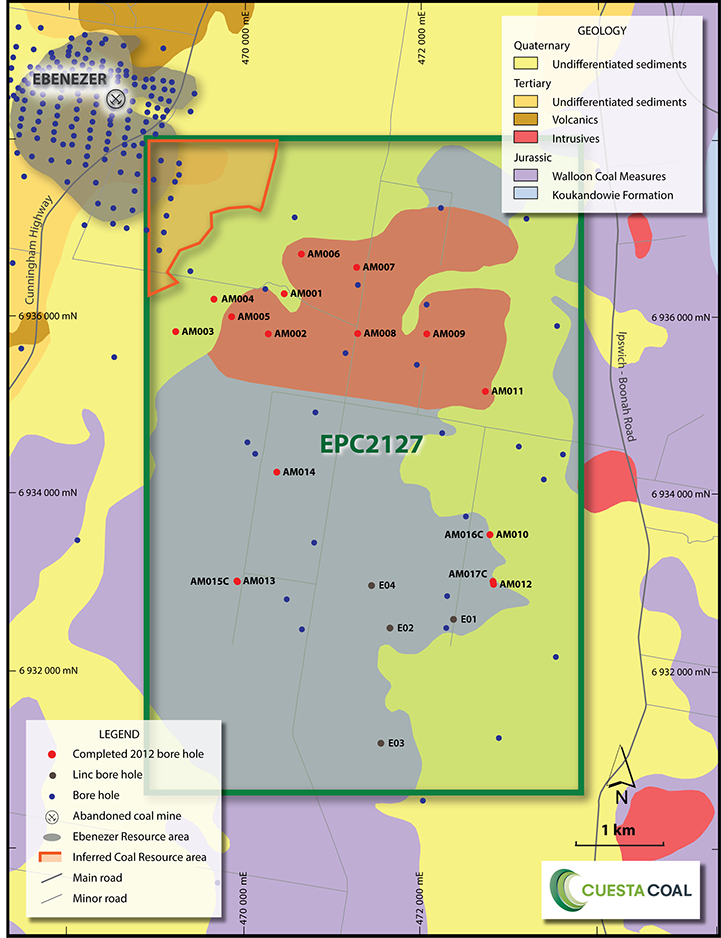 Historically there have been 17 open holes and 1 cored hole on EPC 2127 drilled by a number of companies exploring the region since the 1970’s. A number of drill holes and water bores on the property indicate coal seams of 2-3m at shallow depths. In 1993, Idemitsu South Queensland Coal drilled hole R1118 within the EPC 2127 area to 126m in depth recording multiple intersections of coal.

The Amberley Project is located 5km from the existing Ebenezer Mining Lease.  The Project area is located close to infrastructure, being 8km (by truck) to the Ebenezer coal loading rail loop and 80km (by rail) to the Port of Brisbane.