Cuesta is one of the first companies to explore for coal in this region.

The tenements which comprise the Eastern Galilee Project are situated east of the currently known boundary of the Galilee Basin Coal Measures.  The target objective is to identify coal resources further to the east of the Late Permian Betts Creek Beds.

Two of the tenements (EPC 2079 and EPC 2080) are under a Farm-In and Joint Venture agreement with QCI (Galilee) Pty Ltd (QCI). Under the terms of the agreement, QCI can earn 51% through expending $3m on exploration. Due to the recent grant of both tenements, the Snake Creek JV has been activated.

The Yellow Jacket Project has been identified as a strategic asset for Cuesta with medium to long term development potential (post Moorlands Development).

A map indicating the location of the Eastern Galilee project is shown in the figure below. 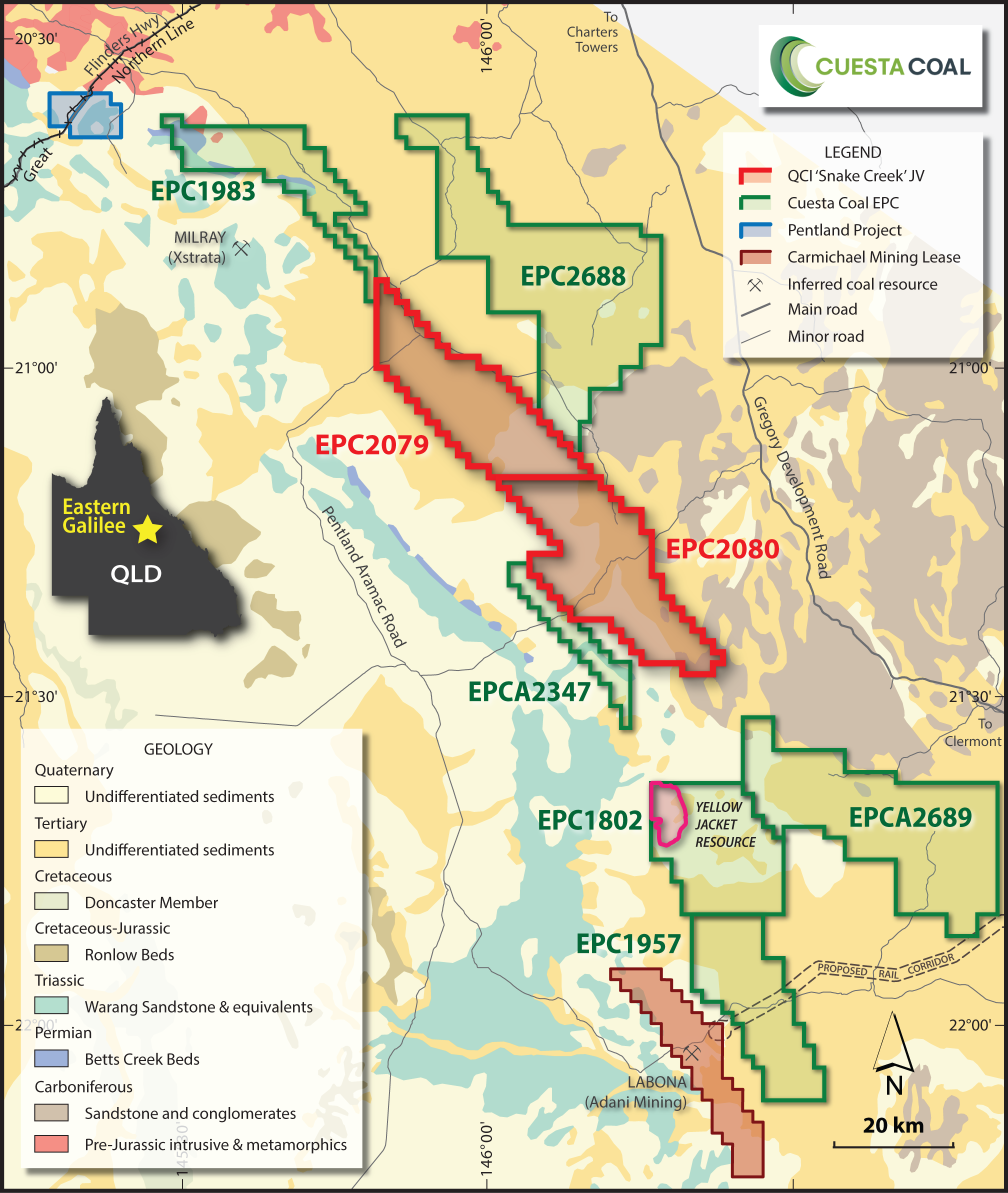 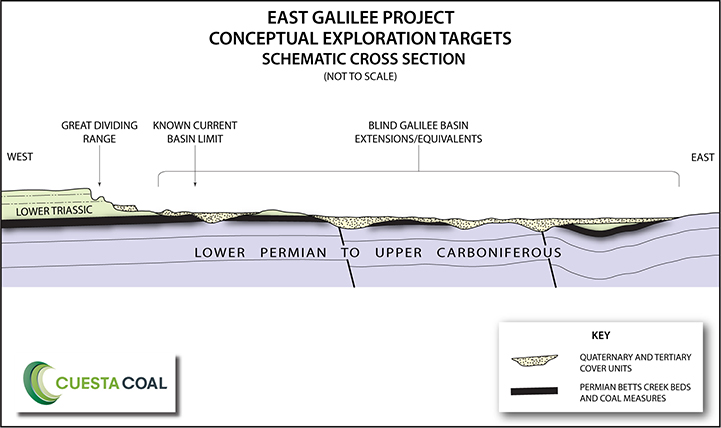 Prior to Cuesta exploring in the region, virtually no coal exploration was conducted.  There was a historic recollection that coal may have been intersected in the region of Yellow Jacket in the 1930s when a water bore was sunk.

Following  up on this lead and combined with intensive geological desktop studies, Cuesta, in Q3 2011, conducted a scout drilling campaign comprising 9 holes at EPC 1802.  This scout drilling discovered coal in the northern part of EPC 1802 at drill holes HP7, HP8, and HP9, which are located 8km east of the known Permian Coal margin in the Galilee Basin.

Following on from this, with more widespread drilling in 2012 and 2013, Cuesta intersected coal over an extensive area on EPC 1802, now known as the Yellow Jacket Project.

OTHER PROJECTS WITHIN THE EASTERN GALILEE

Following the recent grant of both tenements under the JV, QCI (Galilee) Pty Ltd (QCI) will manage the tenements. This will include desktop studies and planning and implementation of scout drilling programs to test for coal occurrence.

QCI and Cuesta look forward to working together to develop the Snake Creek Project.

In conjunction with the 2012 exploration activities in Yellow Jacket, a detailed desktop review of Cuesta’s 90% owned EPC 1957 has confirmed a target area of up to 50km2 is present immediately south of the Adani Carmichael Project rail corridor.

Historical regional seismic lines have been investigated and they indicate syncline structures present in Yellow Jacket and Karura that have the potential to preserve the Permian coal measures of the Betts Creek Beds east of the known sub crop.  This has been proven in Yellow Jacket through the drilling activities in 2011 through to 2013.

The syncline structure in Yellow Jacket match the gravity survey conducted during 2012.  There are very similar geological properties in the Karura target area as there are in the Yellow Jacket Project, which show a strong correlation between the synclinal structures observed through the seismic data and the gravity low anomalies, which warrant further exploration to verify the presence of coal.